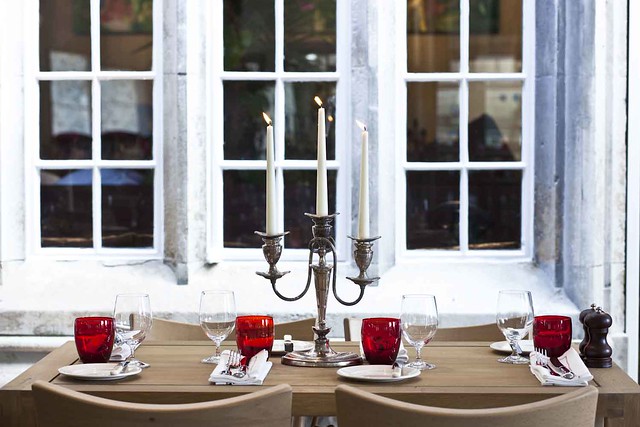 The discerning gent often likes to dine overlooking a waterfront. You could say this was for the calming influence of the waters’ rhythmic motion or the way the shimmering lights reflect off the surface. Whatever the reason, it’s not a bad way to dine at all.

The capital caters for this need with the River Thames running through the city like a grand artery.  Dining options on the south side of the River Thames are plentiful but what about the lesser-known north side of the Thames? Well, an eating establishment going by the name of Perkin Reveller has been added to the north side in prime position next to both the Tower of London and Tower Bridge. Elysium ventured to the realm of the Beefeater, the guardian of the gate to where you might next be dining on the waterfront.

The restaurant’s name comes from Chaucer, the father of English literature and very much a discerning gent of his time. Whilst working as Clerk of King’s Works in the late 13th century Geoffrey Chaucer oversaw the construction of Tower Wharf, where the Perkin Reveller is now located. Within Chaucer’s Cook’s Tale he described an apprentice chef known as ‘Perkin Reveller’ who had a reputation for jollity and mischief – from which the venue’s name is taken.

Perkin Reveller is split into three main areas: the cocktail bar, the restaurant and the outside terrace. Entering this London restaurant from the bar you’re brought back to a medieval time that in many ways looks like a small chapel, utilising the listed brick work features of the Tower. The restaurant, in contrast, is large with a clean modern look. Tables are banquet-sized in keeping with the medieval theme, but there are also smaller tables to suit couples and smaller groups. The terrace would be a glorious seat in the summer months with long reclaimed oak beaches to enjoy the views and a cocktail or two. The games chest, hosting all manner of amusements is a nice touch. 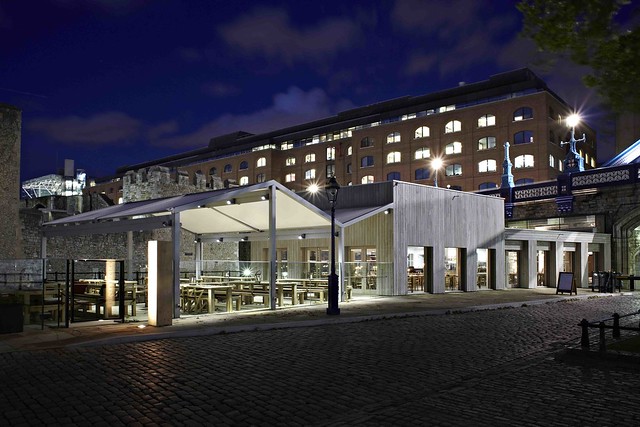 After enjoying a cocktail in the bar upon arrival, which is highly recommended due to the very knowledgeable cocktail waiter, we were ready to be seated in the main restaurant. It’s an open and airy restaurant, maybe a bit too open for some tastes but with views of Tower Bridge lit up on one side and the Tower glowing on the other, there is a unique feel to the venue that other restaurants cannot offer.

To ease ourselves into the evening an whet the appetite, we opted for the salmon salad (£8), crispy whitebait (£5) and, because we were feeling daring tonight, a couple of rock oysters (£2 each). The oysters arrived first, served up on a bed of ice with a lemon,Tabasco and shallot vinaigrette. The trick with oysters is to dive straight in, and at Elysium we don’t like to show any hint of indecision so down they went. Tasting of the fresh sea, with the kick of the Tabasco we can confirm they were very nice indeed. The salmon salad and whitebait soon followed – the salad was a healthy portion of the pinkest smoked salmon while the whitebait was delicious with the homemade tartar sauce. A bottle of house red (£17) helped ready us for the main course.

Knowing Elysium the way you do, you’ll not be surprised to find out that a steak featured as one of the mains ordered. In this case it was a sizeable ribeye steak (£25) with chips (£3) and a peppercorn sauce (£3). The other was the Cotswold white chicken ‘forest style’ (£14.75). Both looked and smelt delicious arriving at the table. The chicken is very succulent and tender, and due to being cooked three ways meant each mouthful was different – a great skill of the chef. The ribeye was grilled to perfection, each mouthful incredibly tasty on the palate. This was a good piece of meat, in a size expected by any discerning gent. Whilst enjoying our mains the sight of Tower Bridge lit up and reflecting off the water was a magical sight to behold. The staff at the Perkin Reveller also strike the right balance of when to approach and when to leave you to it, whilst also very knowledgeable with the menu too, so if you’re caught between the options then help is always at hand.

Taking a short break to enjoy the views, whilst still savouring the taste of the mains it was time for desert. Opting for the peanut parfait with raspberry sorbet (£6) and the stilton cheese (£4), this was a very good way to end the evening. The peanut parfait is simply stunning, there’s no other word for it. Even though our appetite was well and truly quelled, we’d have gladly eaten this again. The stilton was flavoursome, just how a good piece of cheese should be. Very good indeed. 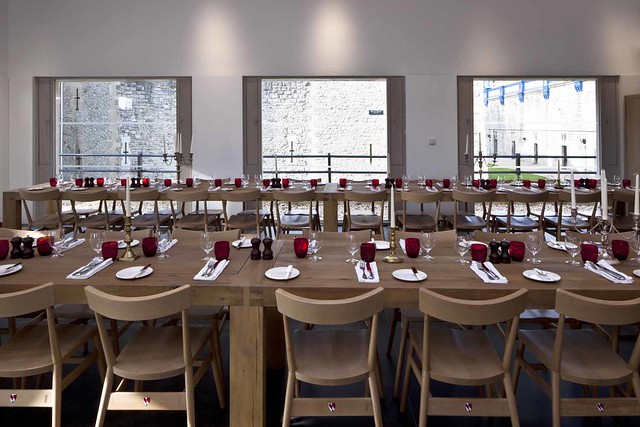 The food at the Perkin Reveller is of a very high standard and the chef here likes to keep the menu fresh with seasonal offerings – all good things in Elysium’s view. Tourist attractions in London are often let down by the standard of food available in the vicinity so to have a spot like this, connected to a landmark as renowned as the Tower, is something Londoners and tourists should be grateful for. Dinner on the water’s edge is perfect for the romantics, whilst big portion sizes and plates packed with flavour should see the Perkin Reveller lead a merry dance on many a diner’s palate this year.