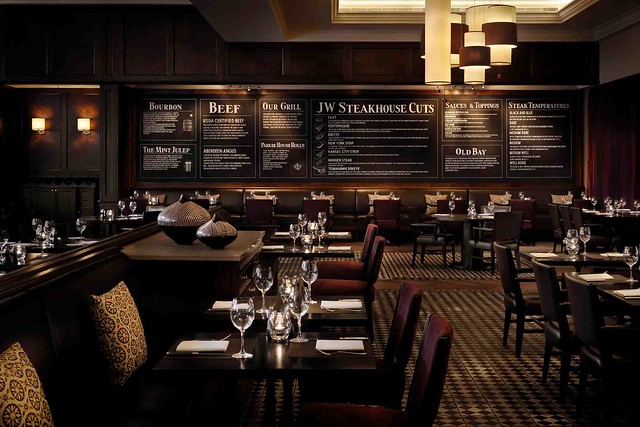 The discerning gent is all about good quality meat when dining is on the agenda. Largely based on an instinctive desire that has been passed down since the evolution man. Its longevity is something that hasn’t diminished despite numerous attacks from fad diets. No surprise then that it’s a joy to behold a restaurant that attempts to sate this desire, so anticipation was high when the discerning gent visited the JW Steakhouse. As the names suggests, this restaurant is all about the meat that headlines the menu – time for the discerning gent to get his teeth into it then.

The JW Steakhouse is one of the two restaurants located within Grosvenor House Hotel situated on Park Lane in the heart of London. The restaurant overlooks Hyde Park, although not with the same aerial views enjoyed from one of the hotel’s bedrooms. The restaurant is open and airy – natural light coming in through the large windows on one side makes it feel even larger. Walking into the restaurant you immediately feel a certain buzz about the place. Seating is a mixture of comfortable booths, large tables and smaller set ups offering a more intimate experience, while a private dining room for up to eight guests is also available. At night the restaurant is dimly lit, even though large and busy – you can still zone into your immediate conversation and company. 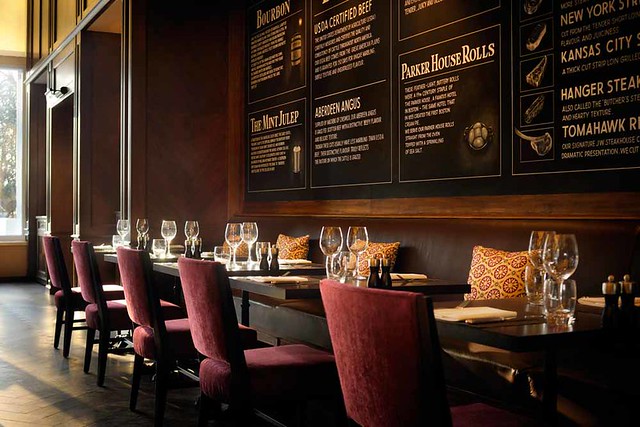 After getting seated and being introduced to our waiter for the evening one thing is immediately apparent – the staff are very knowledgeable about the menu but also hugely passionate about the food. If you’re not careful you might end up discussing all manner of culinary delights with your waiter without eating anything! Not for the discerning gent though, it’s great to talk about good quality food but even better to eat it.

The menu is made up of a selection of classic meaty and seafood dishes with a heavy American influence put together by head chef Paul Hallett. This is after all an American steakhouse with signature dishes. After some thought and discussion with our waiter we decided on the fried calamari (£12) and the Maryland style lump crab cake (£14) – both dishes coming with old bay tartar sauce. However, before even setting eyes on our starters we were presented with a beetroot, walnut, orange and goats cheese surprise appetiser to share. It was the perfect way to set up the appetite with its fresh flavours – a great touch.

Before long the starters arrived that the table – as the saying goes you eat with your eyes and if this was the case the plates might have been cleared without touching the table. Thankfully we got to enjoy the dishes – the calamari smelt so fresh while the light batter had a crispy bite, working very well with the tartar sauce. The crab cake was succulent and juicy, again great with the tartar sauce. Both were substantial in portion size too. If you’ve ever been to America you’ll know that their portion sizes are a touch bigger in comparison to their European cousins. To compliment the meal we were recommended a bottle of house red (cabernet sauvignon) which tasted delicious and was to get even better with main course.

This is what the JW Steakhouse is about – meat and plenty of it. There is a bewildering array of steaks to choose from including American USDA beef or Aberdeen Angus. With so much to choose from, a decision can be tough, so to make it easier there’s a large blackboard on the wall detailing each cut and highlighting characters of the meat. Although very American in approach, this should be welcomed by any meat aficionado whether experienced or novice – revel in the plethora of options or use the guide to steer you towards your ideal cut. 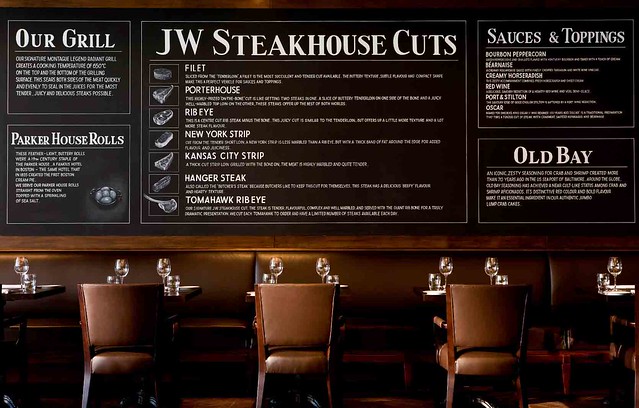 We opted for the 12 hour braised short ribs with buttery mash (£17) and the 700g American USDA beef T-bone steak from the specials menu (£27) with sides of roasted vegetables (£6) and au gratin potatoes (£4). Again service was pretty speedy – they don’t like to keep you waiting here so if you feel the need for a breather between courses then just let your waiter know. 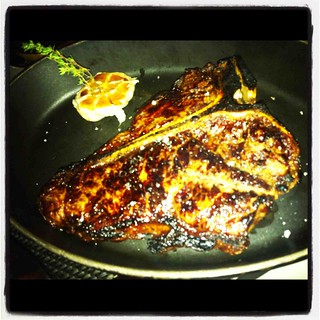 The food arrived at the table and was a spectacle to behold. The ribs were so tender and fell away with the lightest touch of the folk due to the slow and extended cooking. Each mouthful was full of flavour while the mash was the perfect accompaniment to catch all the juicy gravy deliciousness. The T-bone steak arrived at the table looking more like a cut from a dinosaur it was so big – about 2 inches thick and perfectly cooked to order. The great thing about a T-bone is enjoying two different cuts of steak – the buttery tenderloin on one side of the bone together with the juicy loin on the other.

This was a meat feast to savour and enjoy – the wine now at the perfect temperature to compliment each mouthful. As a wildcard the ‘Oscar-style’ sauce was chosen to accompany the steak – lump crab and asparagus topped with béarnaise (£6) and worked a treat with the T-bone if you like the idea of a played-down version of surf ‘n’ turf. Again portions are on the very generous size – this is the place to come if you have a real hunger to satisfy.

After such an epic feast surely there couldn’t be any space for desert? On most occasions this rule would prevail but we just couldn’t leave without experiencing the ‘best cheesecake this side of the pond’. We were recommended the cheesecake (£10) at the hotel reception and even our waiter insisted this was something we just had to try. Such billing deserves our attention and it would have been foolish of the discerning gent to decline such an invitation. The slogan for the cheesecake claimed “you may not want to share but you should” which built up excitement and anxiety in equal measure. 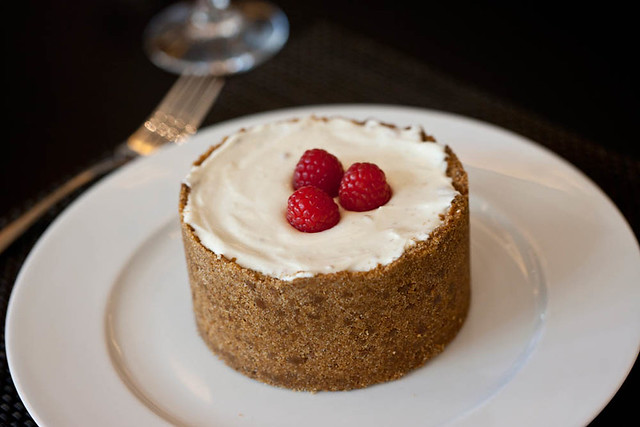 Arriving at the table the cheesecake looked like a fortress of crumbly biscuit encasing a lake of creamy cheese and sweet topping. We can say that this cheesecake certainly lived up to its billing. Sadly we only managed to devour half of the desert between the two of us. However honour was restored in some part when the waiter mentioned that he’d only ever witnessed the finishing of this desert on two occasions during his lengthy employment at the restaurant. If you come to the JW Steakhouse you must try it too!

The Park Lane location and grandeur of the Grosvenor House Hotel add to experience of dining at the JW Steakhouse, but in truth it doesn’t need it. The food is top notch with Paul Hallett and team providing a mastery of steak cuts and flavours that work very well together. The restaurant is large enough to cater for all types of diner – large social groups, business dinners or an intimate meal for two. The prices are very reasonable for the location and perhaps demand you leave the confines of the city to enjoy a meaty plate of American sumptuousness. Just make sure you come armed with a hefty appetite!