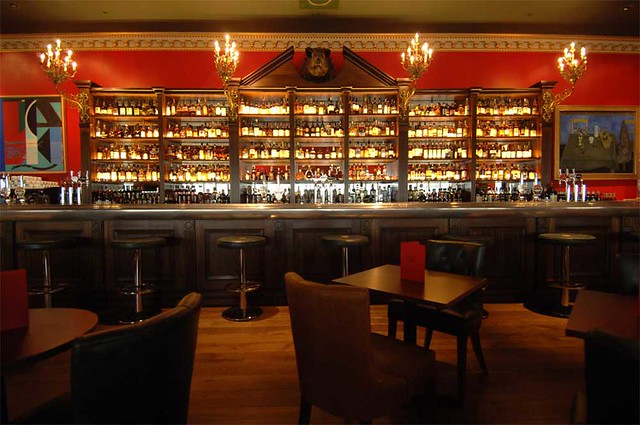 The city is where many of this nation’s biggest deals are agreed each day, but we all know that big decisions aren’t made with an empty stomach. Elysium thought is was about time we checked out one of the biggest financial districts in London to find out where the discerning gent could go to fill his toned belly (you’ve been following the Bond workout, right?) before he filled his firm’s coffers. We headed to Boisdale of Canary Wharf to see if its culinary delights stood up to the heights of the amounts traded.

Boisdale of Canary Wharf is one of three London-based restaurants under the same name, with the other two based in Belgravia and Bishopsgate. This one is located on Cabot Place amongst the concrete high-rise office block jungle that is Canary Wharf. There is also a live jazz band which plays most nights – with some notable performers often secured it’s wise to check the schedule in advance if you have a soft spot for live music whilst dining, as Elysium does.

This restaurant is made up of two floors – the second floor is a bar/brassiere that inevitably attracts the city after work crowd. Our concern did not lie here; instead it was to the third floor restaurant where we were to dine. Upon entering you’re immediately hit by the Scottish gentleman’s club vibe. From the mounted stag’s head, tartan carpet, leather armchairs and table top thistles – it’s the epitome of every Scottish cliché – but it all works. The restaurant has a decadent feel and the impressive whisky bar is imposing and alluring at the same time.

We were seated at a table overlooking Cabot Square – a great view perhaps on a sunny evening but in darkness lost amongst the office blocks. A quick scan over the menu immediate set the heart racing – this place is designed for the carnivore. Pretty much every dish except for a couple of vegetarian options includes meat from one animal or another – meat, fish or poultry. For starters we opted for the Heritage tomatoes with goats’ cheese (£9.50) and the Hibridean hand-picked crab tian with avocado purée and melba toast (£12.00). To go with the starters we went for a bottle of house red – rioja (£32.50). Service at Boisdale is knowledgeable and quick, and not to intrusive either. This leaves you to enjoy your food and company in a unique venue. Getting stuck into starters – the crab tasted really fresh and light – a great combination with the avocado, while the tomatoes was a colourful dish full of wholesome smells. The house red was also pretty good too.

Now the starters had got the taste buds fired up, we were really looking forward to the mains. It would have been rude not to try one of the Scottish steaks so we opted for the 14oz Sirloin on the bone (£23.50) and carried on the seafood theme from starters with the linguine with Hibridean crab (£18.00). To go with the mains a selection of sides was recommended: thick cut chips (£4.50), roast field mushrooms with garlic and shallots (£4.25) and Hispi cabbage with chorizo and caraway (£4.75). 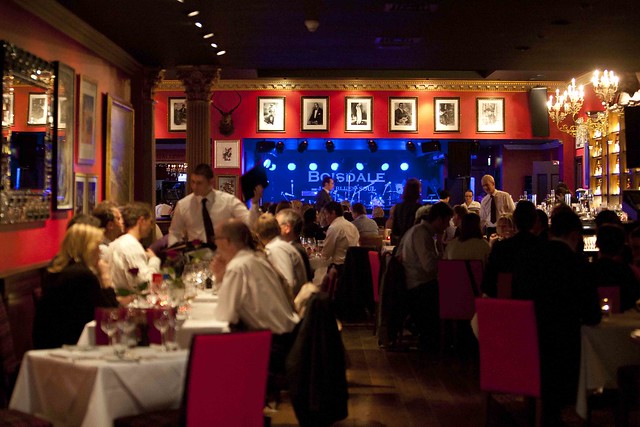 You already know that hefty portions are a favourite for the Elysium team so when the mains arrived at the table a discerning nod of the head greeted the waiter. The steak was one of the biggest slabs of meat witnessed by the Elysium team, cooked perfectly to the level requested (medium-well) and sizzling with muscle-building goodness. The linguine followed the hefty theme with plenty of crab and a flavoursome sauce. Looking out on to Cabot Square, our meal was devoured whilst the jazz band played on. If there was a deal to be decided, after this course we were definitely ready to seal the agreement.

After taking a short break after mains to listen to the jazz band, but more crucially take a breather after sizeable mains, it was time for desert. Amongst the cheesecakes, tarts and ice creams the sticky toffee pudding caught the eye (£6.50). This traditional favourite was served with caramel sauce and Cornish clotted cream. It was a great way to finish off the meal and satisfy the sweet tooth, all whilst the jazz band continued to entertain.

Boisdale of Canary Wharf is very well matched to its surroundings. There is a definite ‘city-feel’ here but you’d expect it to have it here. The venue is a definite talking point, somewhere that’s great for client entertaining or to secure that lucrative deal. The food is of an impressive standard, with a good mix of classic dishes and wow-factor plates (notable caviar and shellfish options). The portion sizes here suits the masculine demand for hearty meals – the city discerning gent would be at ease here with the menu and surroundings, while the live jazz band is a great bonus. Elysium shall be back to tackle another grand steak soon…