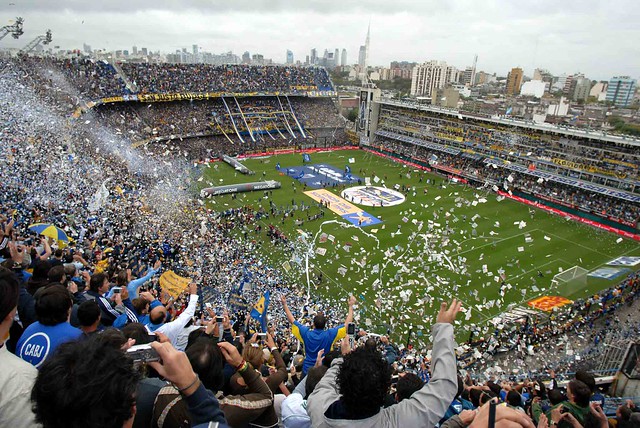 Somewhere in the world right now, a family is having the following conversation around the dinner table. It could be a dinner table in somewhere like Vietnam, Nigeria, Bolivia or Israel – rest assured it will go something like this:

Father: “Son, you know you said you wanted us to take you to a Premiership match for your birthday this year – well guess what we’ve managed to get?!”

Father: “Stoke versus Hull at The Britannia”

OK so it may not sound that glamorous to us Brits who get to gorge on Scudamore’s football feast day in day out – but for millions of sport fanatics elsewhere in the world, a trip to a Premiership match in faraway England is a very sexy prospect. And quite right too.

The Sports Travel industry is big business. Ticket package trips to watch sporting events are ubiquitous – £279 for this derby match here or £1,250 for that boxing match there. It’s an understandable business model.

But as with any regular holiday, the package phenomenon can be a little unimaginative. Boxing bouts in Vegas, a Grand Prix in Monaco or maybe a Milan derby in …Milan. You’ll have a great time but couldn’t you have pushed the boat out a bit further?

Never fear, Elysium Magazine has been pushing its very own discerning boat out a rather long way just for you – and here we present the five greatest sporting travel experiences known to man… 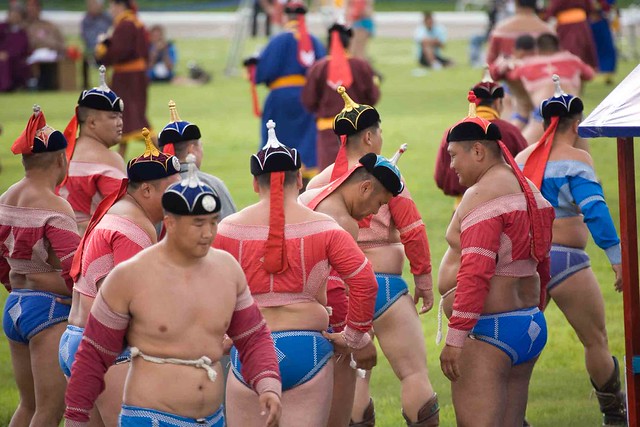 Known as the “three games of men”, women can now compete in archery and girls in horse racing – though understandably, the wrestling is still a strictly testosterone-based affair. This hugely traditional Mongolian festival of speed, strength & skill is steeped in the folklore and mystic of the steppes, with plenty of nods to the nine tribes of Mongolia.

The opening and closing ceremonies include impressive displays by mounted cavalries, monks and athletes, all played out to the unique sonic backdrop of an orchestra comprising instruments made from sheep ankle bones. All of which makes Glastonbury seem quite tame by comparison. 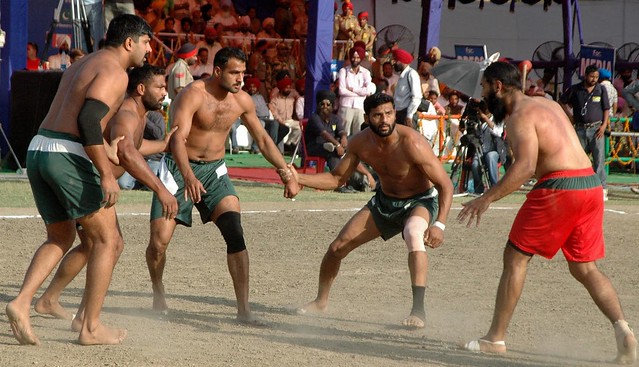 What: A cross between wrestling and rugby

If you don’t know Kabaddi, then you don’t know what you’re missing.  Like most thrilling sports, it is a simple game where two teams occupy opposite halves of a small field and take turns sending a “raider” into the other half in order to win points by tackling members of the opposing team; then the raider tries to return to his own half, holding his breath and chanting the word “Kabaddi” during the whole raid.

If you think that sounds a bit mental wait till you get to the World Cup Final, held annually in Punjab. Imagine the ferocity of a Milan football crowd, throw in the colour and spectacle of a Brazilian carnival and the sensory, visual feast that is the sub-continent and you’re halfway there. 16 international teams compete for the world crown and with an England team entering in 2012 there is even more reason to go along and cheer on the boys and girls. Oh and India are the Brazil of Kabaddi, so don’t be too surprised if they win. Again. 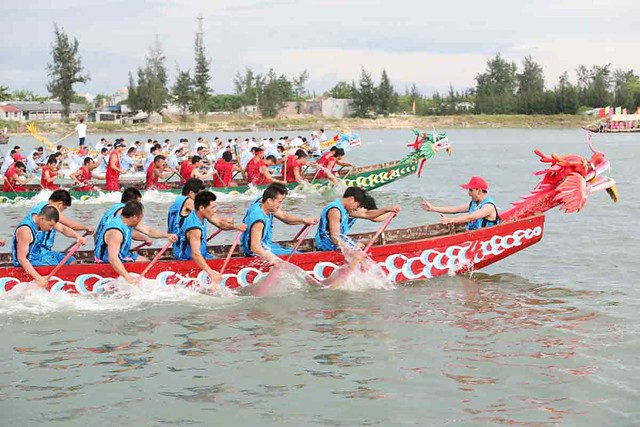 What: Boat racing with beats

Imagine the Cambridge-Oxford boat race with big pounding drums instead of the shrill voice of a tiny cox?  And remember that canoe scene in the opening credits of “Hawai Five O”? Mix it all up throw it in a big sporting pot and hey presto – welcome to the unique world of dragon boat racing.

Dragon boats are the basis of this team paddling sport, an amateur water sport which has its roots in an ancient folk ritual of contending villagers held over the past 2,000 years throughout southern China. For competition events, dragon boats are generally rigged with decorative Chinese dragon heads and tails which add to the spectacle, given even greater dramatic effect by the pounding of the rhythm drum which maintains the pace of the oarsmen.

The 2013 Guangzhou International Dragon Boat Racing Tournament took place at the section of river between the Haiyin Bridge and the Guangzhou Bridge on the mighty Guangzhou River.  Teams from 17 countries compete with average race lengths of 600m. 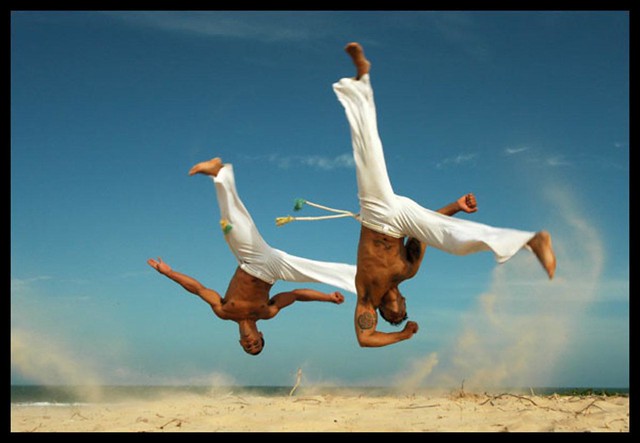 What: The Matrix meets Ibiza

Capoeira is an Afro-Brazilian martial art that combines elements of dance and music, and is marked by deft, tricky movements that are often played out on the ground. The sport also has a strong acrobatic component and is always played along to an infectious musical soundtrack.

Historically and culturally significant, Capoeira was first introduced during colonial times by slaves and has since evolved into a practice enjoyed internationally, successfully finding its way into popular culture, through many computer games and films, notably “The Matrix”.  In fact it’s so influential, that even Ronaldinho famously used a technique learnt from Capoeira in beating Ashley Cole during that infamous match in the 2002 World Cup. No, really.

While not strictly a sporting event, this is close enough and then some. The Capoeira Training Camp is a year-round opportunity to meet other Capoeiristas and train with famous “Mestres” in their own Capoeira academies, train in the birth place of Capoeira and experience the true atmosphere of Salvador Bahia.

Salvador is a city on the northeast coast of Brazil and the capital of the North-eastern Brazilian state of Bahia. All training takes place in the Mestres own academies, which are in different neighbourhoods of Salvador. And Salvador is really not too shabby a place to while away a few days for the discerning gent. 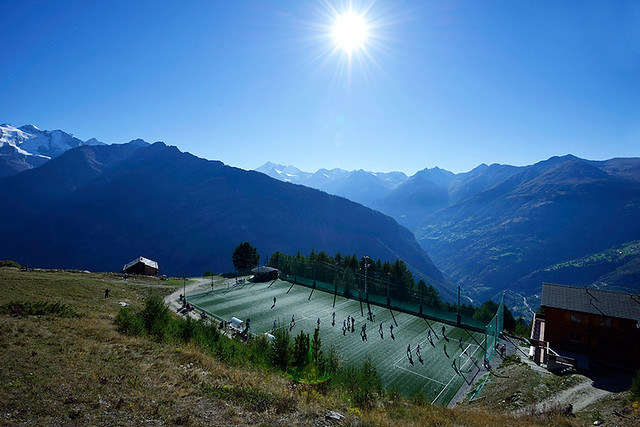 What: Football in the mountains

At approximately 2 kilometres above sea level, the Ottmar Hitzfeld pitch in Switzerland ranks as the highest in Europe. The stadium itself, which resembles a five-a-side venue more than an 11-a-side pitch, serves as the home of FC Gspon and has also hosted the European Mountain Village championships.

The stadium is carved into a mountainside 2,000 meters (6,561 feet) above sea level and surrounded by vertiginous peaks near the resort of Zermatt.  It was built on one of the few patches flat enough to hold it and because there wasn’t enough room for a proper pitch, the team plays on a three-quarter-size field akin to a five-a-side field. The turf is artificial, because grass won’t grow at this altitude. And because the village is too high for traffic, players arrive by cable car.  How cool is that?

“We lose a lot of balls,” striker Lucas Furrer says.