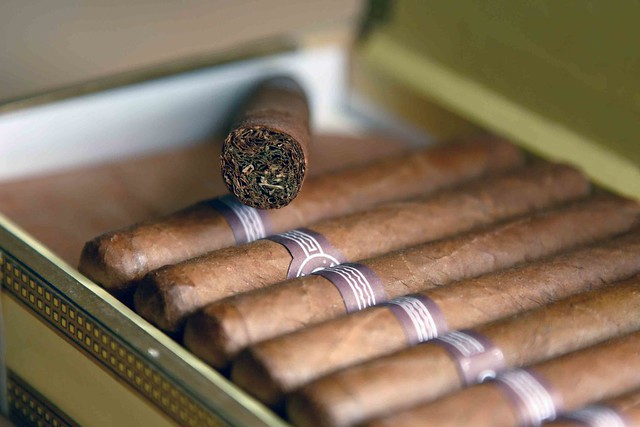 In the second of Elysium Magazine’s three-part special on Cuba we look at the world of Cuban cigars. Whether you’re a fan of smoking cigars or someone that likes to dabble – smoking a cigar is an experience. From the picking of your brand, to the cutting and smoking – it’s a journey from start to finish. Here Elysium Magazine guides the discerning gent through the world of rolled tobacco.

Smoking a cigar often represents a success in life – a wedding, the birth of a child or securing the deal of a lifetime at work – a sense of accomplishment is synonymous with lighting up a cigar. Of course major celebrations aren’t the only occasion when someone smokes a cigar. Many people choose to regularly smoke cigars over cigarettes. Cuban cigars have reputation for being some of the best in the world due to the science-like art of growing tobacco. The hot Cuban sun plays a major role.

It’s worth mentioning that while smoking in any capacity is bad for your health, a cigar perhaps represents the lesser of the two evils. Armed with the facts, let’s now look at how the discerning gent can become a connoisseur of the Cuban cigar.

All good cigars will need to be cut with a specialised guillotine or scissors. The end you’ll be cutting is the cap end (the covered end) and you’ll need to ensure to don’t cut below the belt line as the cigar will unravel in your hand. This ‘belt’ holds the cigar together. A sharp clean cut is essential to allow the smoke uninterrupted passage through the cigar.

When lighting a cigar it’s best to use either a butane lighter or a match. Anything else, such as a candle, tends to taint the flavour of the cigar which you don’t want. Hold the cigar horizontally, light the end and slowly revolve the cigar. This is known as toasting, giving it an even burn and keeping the smoke a cooler temperature – hence providing a better smoking experience.

Unlike cigarettes, cigars will naturally go out if left unattended. It’s nothing to worry about, just removed any ash off the end and blow through the cigar to push out any stale smoke, then relight. Smoking a cigar is about taking the smoke into your mouth but not inhaling into your lungs. You’re tasting the smoke and tobacco more than anything else.

The joy of a cigar lies in the taste. From the initial draws, throughout the burning and in the final moments – the notes you’ll taste vary depending on brand and size. Often great after dinner or enjoyed with a rum straight up, expect to get notes of spice, honey, caramel, wood and earthiness.

The final third of a cigar is when the smoke is at its strongest which is when many people part company with it. The flavours become bitter and the effect of the cigar on your health can become increasingly detrimental. You don’t need to stub out a cigar as doing so will release foul odours into the surrounding vicinity. Simply leave the cigar in the ashtray and it’ll extinguish itself. Once completely out dispose of the cigar butts to avoid any unpleasant smells.

3 of the Best Cuban Cigars

Cohiba is perhaps the best premium cigar brand of Cuba. It’s also the preferred brand of Fidel Castro in his numerous and iconic cigar-smoking pictures. The Robustos represents an ideal burn with balanced strength and flavour. The initial taste is slightly salty before developing into honey and gentle spiciness. This continues during the burn with woody notes developing as the flavour intensifies for the finish.

Once the most popular cigar brand in Cuba until the rise of Cohiba in the late 60s, the Montecristo is still one of the most famous cigar brands you can buy and the NO.1 is exceptional. A medium bodied cigar, it starts with spicy notes developing into light coffee bean flavours progressing onto a dry woody finish.

Named after Shakespeare’s’ tragic lovers, Romeo y Julieta is one of the oldest Cuban cigar brands and one that was favoured by Sir Winston Churchill himself. The Churchills variety was devoted to the man and is an impressive size at 7” in length. Earthy and wooden at the start, this continues into notes of vanilla, coffee and tropical fruit. The sweetness subsides for the finish.