For Your Drinks Cabinet – Glenmorangie Whisky

At Elysium Magazine we’re down with tradition, so if there’s an age-old celebration to be had, we aren’t going to say no. So with the 25th January marking the merriment of Burns Night in Scotland, we thought what better way to toast the evening than with premium scotch whiskies from Glenmorangie.

For the unfamiliar, Burns Night is the traditional celebration of Scotland’s best-known poet Robert Burns – a man whose command of language and word was of the highest order. He penned the some of the most well-known songs in the world, including Auld Lang Syne. For this, and much more, he’d definitely fit the bill of the discerning gent in Elysium’s eyes.

So on a night filled with traditional Scottish food (haggis anyone?), drink and entertainment grab some friends and take your pick from Elysium’s favoured line-up of Burns Night tipples. The decision on taste is up to you. 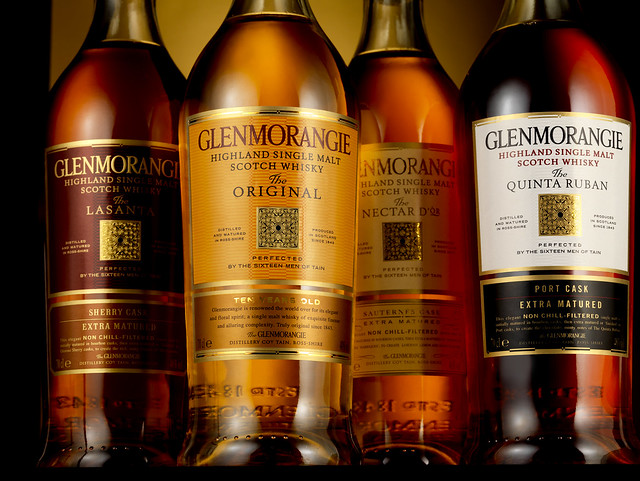 For those favouring a spicy tipple, Glenmorangie Lasanta has a lusciously soft texture and deep, enticingly sweet aromas.  It boasts flavours of chocolate covered raisins, honeycomb and toffee and when mixed with water notes of dessert sherry wine emerge.

The original expression of Glenmorangie’s elegant, floral spirit. The flavours of this classic whisky reproduce fruit mixed with vanilla, and when water is added floral notes combine with nutmeg and ginger.

A wine connoisseur’s delight.  After ten years in American white oak casks, Glenmorangie Nectar D’Or then spends its final two years in Sauternes casks. It is here, in the hand selected wine barriques from Sauternes: the most famous and ancient sweet wine growing region of France, that this whisky develops its rich, spicy and dessert-like flavours of French patisserie with a citrus taste.

Ideal for port lovers Glenmorangie Quinta Ruban has spent 10 years maturing in American white oak casks, before being transferred into specially selected ruby port pipes from the Quintas wine estates of Portugal. With flavours and scents of nutmeg and orange, the mood changes when water is added to tastes of Turkish Delight, providing an altogether sweeter experience.

All Glenmorangie varieties available via www.thewhiskyexchange.com

For more details on the Glenmorangie range visit: www.glenmorangie.com