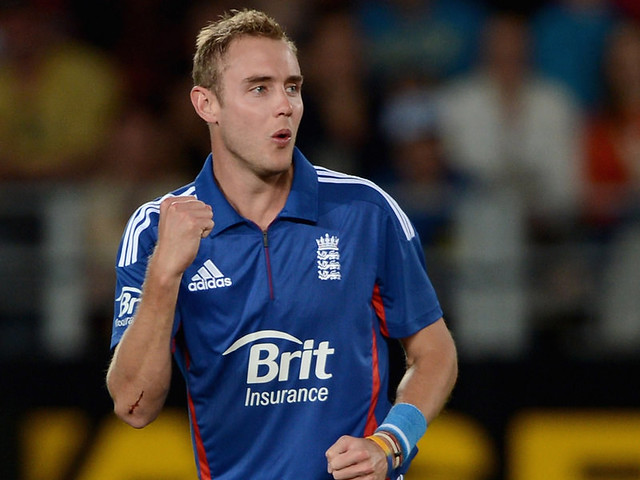 It’s been tough for England cricketer Stuart Broad over the last few months. Injury ruled him out of last year’s historic win over India in the test series. Once the Twenty20 captain was fully recovered and ready to join the team for the One Day Series in January this year, heavy snowfall cancelled his flight over. A good captain takes on all challenges and that’s exactly what Stuart did now that he’s back in the team and looking to regain the form that could play a crucial role in the upcoming Ashes Series this summer. Elysium Magazine caught up with Stuart to discuss the life of an all-rounder and his ambitions for Top Gear…

Elysium Magazine: It’s a big year for you in 2013, can you tell us what’s to come, and the professional ambitions you want to achieve?

Stuart Broad: We’ve currently got a challenging Twenty20 series with New Zealand, followed by the big Ashes Series this summer. There’s a lot that can be achieved in the next 12 months but it’s important that we don’t look too far ahead. I’m a big believer in only looking at the next hour of a test match – if you do that you get your basics right for that game. Doing that hopefully that helps you win that game.

EM: Tell us about your exercise routine. How hard do you have to train for your sport?

SB: We’ll be playing cricket for most of the year. A general week normally works out as 2pm-5pm On Monday’s, 9am-12pm on Tuesday and Wednesday mornings, then straight into a test match on a Thursday which normally works out as 11am-6pm Thurs-Mon. then it’s all about recovery ahead of the next match.

We obviously train a lot and there’s not that many weeks we have off a year. It also means that when you do get the down time it’s hugely important to make use of it. You train hard for competition mode so it’s good that it comes round more often than not.

EM: You’ve often been touted as the first true successor to Ian Botham’s all-rounder crown. Do you think the role or model of an all rounder has fundamentally changed in any way since his time and with the advent of other forms of cricket?

EM: Is the all-rounder a dying breed?

SB: No, I don’t think the all-rounder is a dying breed. Players work hard to have different strings to their bow. I grew up watching someone like Freddie Flintoff who was a great all-rounder. I enjoy going into a game knowing that if I don’t manage to get the runs I can grab the ball and go and take wickets or vice versa. There is the added pressure now that you’re expected to perform with bat and ball – but I see that as a positive.

EM: For England to stay at the top of world cricket it needs to continue to produce world class players such as yourself. Cricket has arguably been the most successful sport at producing young talent out of the big three (e.g. football & rugby) in recent years – why is this and do you see it continuing?

SB: We’re very fortunate to have a really good youth setup. There’s academies setup throughout clubs encouraging cricketers to play. The under-19 setup is where I learnt a lot – you get to travel to different places and you learn from all these experiences. The ECB has done a great job of getting young players through. We’ve had young guys that come into the England setup and don’t just play, they perform. A lot of that has to do with the academy setups that get you ready for international sport.

EM: Who are your tips as the next big three talents in English cricket?

EM: While more nations are playing the game internationally, there hasn’t been much change at the top of the world order for 100 years i.e. England, India, West Indies, Sri Lanka, Pakistan, South Africa and Australia. Do you ever see this changing with maybe a newer nation, investing millions in its domestic sport and doing a “Man City” – maybe the likes of the UAE, Brazil, China, or USA?

SB: I think it’s tough to buy or invest your way into cricket. I can certainly see other teams developing to become international forces. You’ve seen Ireland come into tournaments and beat some of the big teams already whilst Bangladesh has some really talented players for example. It’s good to see cricket evolving. You go back to the 1980’s when Sri Lanka first came into international cricket, now they have one of the strongest teams in the world. It’s all about creating an interest in cricket in the country, and the more interest you can build with the kids will make them want to play more. I can certainly see different countries becoming very strong in cricket who will be challenging in 15-20 years for the top spot.

EM: What advice would you give to anyone aspiring to be a cricketer?

SB: My advice would be to keep things as simple as you possibly can and to enjoy yourself. I had a lot of friends who were playing cricket when we were younger. I never tried to put too much pressure on myself, I just went out to enjoy my cricket. Obviously I worked hard at my game, but I had a lot of friends who put too much pressure on themselves, always looking at what team they’d get into next and ended up with too much pressure at a young age. Once you get to international-level cricket – that’s when the pressure starts. So as a youngster, just enjoy your cricket and relax.

EM: It’s a long way off, but do you see yourself staying in cricket when you retire or are you keen to try something new? E.g. Freddie Flintoff’s adventure sports and boxing?

SB: Cricket is my absolute love and hobby. It would be hard for me to leave cricket and I don’t think I want to leave cricket either. Trying other things is great and I’m sure I will try some new things once I finish but I’ve been very fortunate to have learnt a lot from cricket and in 10-15 years time I will have learnt more so it would be nice to give opinions back to the game.

EM: You travel a lot for the cricket, but where do you like to go for a holiday?

SB: I like to go on holidays where there isn’t really any cricket! Somewhere like America is a really good place to go. It’s up there with my favourites. Scottsdale in Arizona is really nice, really quite and in the middle of nowhere. I’ve always had an aim to go to Hawaii – maybe later this autumn I could plan to be there!

EM: There’s a lot of pressure on you to perform, especially as England captain, but how do you relax outside of sport?

SB: We play pretty much all year round we don’t have much time to completely get away, but you have to find your own particular techniques to help you relax during tournaments. Whether you play a bit of golf, play on the Xbox, or learn a new skill – I’m actually learning how to play the piano. I’ve not got a musical bone in my body so it’ll be tough interest for me!

EM: And finally, if you weren’t a cricketer, what job would you love to have?

SB: [Without hesitation…] A Top Gear presenter! To drive around the world in nice cars and review them would be amazing.

EM: [When questioned about how he would handle Jeremy Clarkson…]